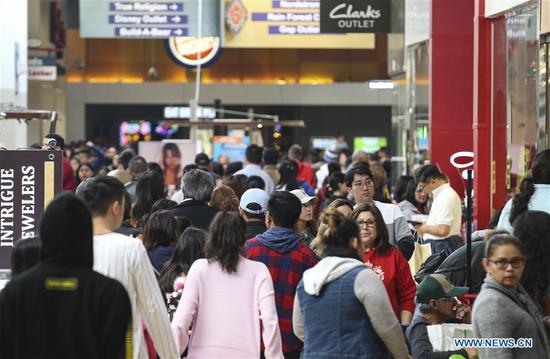 People do shopping for Black Friday sales at an outlet in Ontario, California, the United States, Nov. 29, 2019. (Xinhua/Li Ying)

Retailers, especially small ones, have been struggling to deal with the additional U.S. tariffs on Chinese imports, while consumers, who crave a bargain, are worried about potential price increases in the future.

Holiday shopping season usually refers to the period between Thanksgiving and Christmas, and some define it as the whole months of November and December. The National Retail Federation said holiday sales represent about 20 percent of annual retail sales each year, but the figure can be as high as 30 percent for some retailers, such as hobby, toy and game stores.

In the Cleveland Fed district, a clothing retailer reduced the use of price discounting to offset higher costs resulting from tariffs. A food retailer said that even though tariffs had increased costs, the company "cannot raise prices on a whim" because of fierce competition.

Retailers' reluctance to raise prices is evident to consumers such as Kelsey Burhan and Sloane Smith, who told Xinhua at the Leesburg Premium Outlets in Virginia Thursday night that they haven't noticed any price change for the same stores they usually shop.

"I think it's a good discount. I feel like it's about the same with last year," said Burhan, who planned to purchase some purses at Kate Spade and clothes at American Eagle.

For Kumar Kincun, who has been coming to the outlets on Thanksgiving for the past nine years, this year is certainly different. Despite generally stable prices at this moment, Kincun said he is "definitely" concerned about the additional tariffs resulting from the U.S.-China trade tensions.

"The tariffs would impact the price, it will. It goes gradually up, I think that's what it's happening," Kincun told Xinhua. He said he would purchase more products, including Christmas gifts, early in the holiday season to avoid higher prices later on.

Despite strong opposition, the U.S. government imposed 15-percent additional tariffs on some 110 billion U.S. dollars worth of Chinese imports, effective on Sept. 1, covering a wide range of consumer goods including clothing, footwear, food and books. The United States also threatened to levy additional tariffs on other Chinese products including toys and electronics.

"Retailers are highly competitive, but the ability to compete has been challenging this year because of the uncertainty of the trade war and continued tariff escalation," said Jonathan Gold, Vice President of Supply Chain and Customs Policy at the National Retail Federation, in a statement earlier this month.

While big retailers such as Walmart and Target are able to stock up on months of inventory ahead of tariff increase, press suppliers to share the added cost, and diversify their global supply chain, hands are tied for some small retailers.

"Independent bookstores just don't have the space and the money to buy stock well in advance and warehouse it. So we are more likely to go with just-in-time inventory," said Jamie Fiocco, president of the American Booksellers Association, which represents some 2,000 independent brick-and-mortar booksellers nationwide.

Fiocco, who owns 15-person Flyleaf Books in Chapel Hill, North Carolina, told Xinhua recently that she is "worried" about the holiday season because additional tariffs on books imported from China could discourage publishers from reprinting and many books would run out of stock. "We will reorder, but at this point we reorder at the mercy of the publisher stock," she said.

The tariff impact also goes beyond the holiday season.

Brett Portaro, co-founder of Powercharge Corporation, a six-person startup, said the company's negotiations with a major U.S. retailer on a potential large order are overshadowed by the latest round of tariffs on Chinese imports.

"We are still negotiating with them and the tariffs and the uncertainty have kept that deal in limbo," Portaro told Xinhua in a phone interview early this month. The North Carolina-based lithium ion cell phone accessory company mainly sells power banks manufactured by a partner in the southern Chinese city of Shenzhen.

"It has made our margins much slimmer," Portaro said, noting that moving forward, the additional tariffs would prevent his company from doing business. "The only ones that would be able to compete if the tariffs continue would be large providers because they're able to absorb the hit," he said.

According to the Fed survey, companies affected by the tariffs were more inclined to pass on cost increases. Business contacts in the Chicago Fed district reported that retail prices "increased modestly" and they expected prices to "rise at a somewhat faster pace" over the next 12 months.

"One contact said that food, home goods, and apparel retailers were struggling to pass on higher costs; in contrast, another contact noted that retailers continued to raise prices to reflect higher potential and realized tariffs," the survey said.

Kincun, the consumer, voiced hope that the United States and China can work out a trade deal in the near future. "It does not only impacts China and U.S., it impacts everyone else as well, because both of them are pretty big countries with big economy, so it impacts the world economy," he said.

On the ongoing U.S.-China trade negotiations, Portaro said he is cautiously optimistic. "We are very encouraged that the tariffs have come to a standstill and hopeful that this will soon come to an end," said the startup co-founder.

A potential phase-one deal would have a positive effect on his business and on the industry as well, according to Portaro.

"We anxiously hope that both sides can come to an agreement," he said.