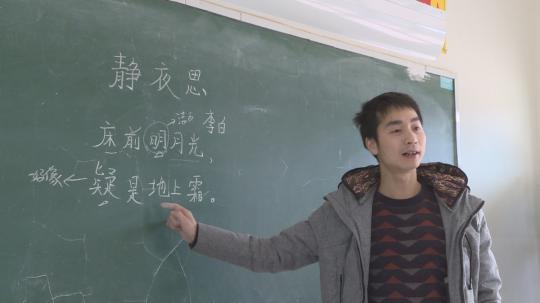 A teacher at a remote mountain village school in Shizhu county, Chongqing, teaches a Chinese ancient poem in class. (Photo by Ma Yuan/provided to chinadaily.com.cn)

In response to a proposal made this year by a member of the National Committee of the Chinese People's Political Consultative Conference, the ministry said students can also learn about traditional Chinese when they learn about Chinese classic writings and Chinese calligraphy at school.

Over the course of history, Chinese characters have undergone constant simplification. Current simplified Chinese was adopted after much research and selection and has strong public support, the ministry said.

Changes to Chinese script are not confined to the modern era, and people who understand traditional Chinese may not necessarily understand classic writings without proper training, it said.

The Chinese mainland uses simplified Chinese, as do Singapore and Malaysia, while Hong Kong, Macao, Taiwan and other overseas Chinese communities use traditional Chinese.

Simplified Chinese has harmed the aesthetic beauty of traditional Chinese and is not conducive to preserving the meaning of Chinese characters and cultural heritage, Han said.

It is not the first time the topic has been brought up during the two sessions, the annual meetings of the national legislature and the top political advisory body.

Wu Shimin, a former NPC deputy and former deputy director of the National Ethnic Affairs Commission, proposed that the mainland should adopt the use of traditional Chinese to preserve traditional culture during the two sessions in 2014.

Feng Xiaogang, a CPPCC National Committee member and famous movie director, proposed during the two sessions in 2018 that some traditional Chinese characters with cultural meaning should be adopted on the mainland and included in textbooks used by primary and middle school students.

Cheng Kai-ming, former vice-president of the University of Hong Kong and a member of the China Education 30 Forum, said despite the disparity and mutually unintelligible regional languages and dialects within the nation, communication was possible throughout different dynasties and remain so because everyone has used the same writing system.

"Traditional characters say more about the history of the words, while simplified characters are easier to understand," he said.

Wang Ning, a professor at Beijing Normal University, said simplified Chinese has dominated the written form of Chinese used on the mainland and the proposition to revive traditional Chinese characters was impractical and too costly.

Many simplified Chinese users can, with some effort and practice, understand traditional Chinese and vice versa, she said, adding that many young people learn traditional Chinese from watching the subtitles of TV shows and movies made in Hong Kong and Taiwan.