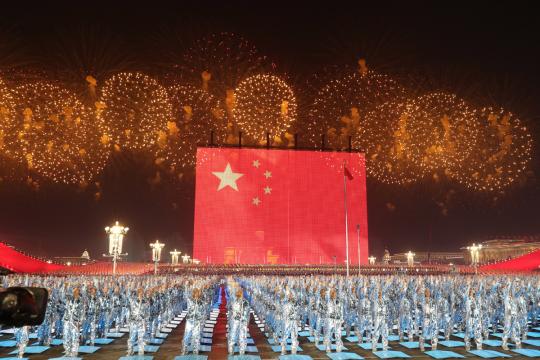 Dazzling fireworks light up Beijing at the evening gala to celebrate the 70th anniversary of the founding of the People's Republic of China at Tian'anmen Square in Beijing on Oct 1, 2019. （Photo/Xinhua）

Leaders of foreign countries and international organizations have sent a multitude of congratulatory messages to Chinese President Xi Jinping to convey their best wishes on the 70th anniversary of the founding of the People's Republic of China.

Extending warm congratulations, Indonesian President Joko Widodo said that through a continuous deepening comprehensive strategic partnership between Indonesia and China, the two countries will create more chances for development so as to bring more benefits to the two countries and their peoples.

Thai King Maha Vajiralongkorn said that on the occasion of the anniversary, he would like to extend his sincere congratulations and kind wishes. He wished China prosperity and the Chinese people a happy life and good health.

Mongolian President Khaltmaa Battulga said that over the past 70 years, China has undergone rapid social and economic development, with hundreds of millions of people lifted out of poverty, and has become a responsible major country in the international community.

Expressing warm congratulations on the groundbreaking achievements China has made on its path to the comprehensive development of the country, Nepali President Bidya Devi Bhandari wished China greater achievements in realizing the country's "Two Centenary Goals".

Belarusian President Alexander Lukashenko said that China has attained great achievements in its development since the founding of the PRC 70 years ago. He said the Belarusians deeply cherish the friendship, mutual trust and respect between the two countries.

Azerbaijani President Ilham Aliyev said that China has undergone leapfrogging development in the past several decades, has scored great achievements unprecedented in human history and has emerged as one of the major countries of the world. The president wished the Chinese people happiness and good health.

Kristalina Georgieva, the managing director of the International Monetary Fund, said China has scored admirable progress over the past seven decades, adding that the world is expecting China to play a leading role in the world's key economic issues.

Tedros Adhanom Ghebreyesus, director-general of the World Health Organization, said China has built a national medical care system after 70 years of relentless efforts, and as a result there has been a remarkable improvement in the health and welfare of its people.

The WHO, he said, speaks highly of China's leading role in the global health sector and is ready to step up its cooperation with the nation to build a healthier, safer and more just world.

Executive Chairman of the World Economic Forum Klaus Schwab said that the unprecedented achievements China has made over the past 70 years have not only benefitted itself but also offered the world a whole new development pattern.

He added that the forum will continue working with China to make greater contributions to the building of a community with a shared future for mankind.